How to not tell a screenwriter what you have in mind

Segrè's novel features the successful, cosmopolitan Daniella, who learns that her widowed 60-year-old mother is getting remarried. When Daniella is expected to act as bridesmaid and assist with the wedding arrangements, it sends her into a tailspin of single gal anxiety-rapidly approaching 30, she is far from engaged. Daniella flies from New York to California to help her mom pick out caterers, florists and the perfect dress, all while trying to sort through her own romantic life and her string of exotic boyfriends, a group whose members include an opera singer and a weatherman. Segrè's story is tender, humorous and dazzles with detail-her description of wedding pastries is one of the most alive moments in the book. Unfortunately, Daniella's lively voice can get lost beneath the avalanche of events. One can see why Goldie Hawn's already attached to the Hollywood adaptation: this book is a confection as sweet as butter-cream frosting and as airy as champagne bubbles.
Copyright © Reed Business Information, a division of Reed Elsevier Inc. All rights reserved. 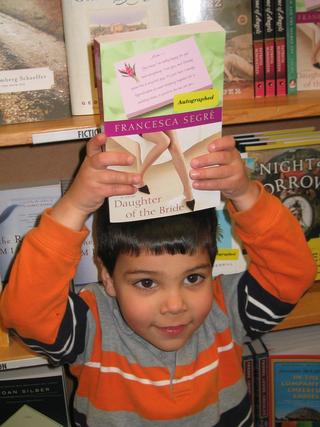 Aidan Shah, 3 years old, represents my fan base at Powell's Bookstore in Portland, OR

How to not tell a screenwriter what you have in mind

Now that the eight screenwriting finalists have been picked – they’ve got to give us their pitch on how they would write the movie, Daughter of the Bride.

Here’s how that communication is done in Hollywood.

Jay Cohen, the producer, emails me Sunday afternoon and says we need to write an email, two paragraphs, to send to the writers. It should tell them what we envision for the movie.

“I’ll have that letter for you in a couple of days,” I say.

“I’m sending it out tomorrow,” he says.

“I’ll have the letter for you tomorrow,” I say.

So, I draft the letter, careful to define exactly what it is we’re looking for. It’s as detailed as you can get in two paragraphs.

Apparently, clear detail and direction is not a good thing to give to writers. Better is to give them just the vaguest sense of what we are after. That way, we don’t block their creative energies and trap them into thinking what we’ve been thinking.

What do you think of that?

Below is the letter we ended up sending out. I’d put my own letter in here – but what if one of the writers stumbled upon my specific story structure and direction and ends up blocking their creativity? Can’t have that!

Attached please find Francesca Segre’s Washington Post article Bride and Joy which is the basis for our project DAUGHTER OF THE BRIDE. We see this as a springboard for a fun, sophisticated romantic comedy about the foibles of a woman in her late twenties / early thirties who finds herself completely immersed and overwhelmed by the minutiae of wedding planning – but instead of it being her wedding, it is her mother’s.

This is very much a jumping off point, and the story can go in many different directions. We have lots of ideas as to how this can play out if the initial concept is interesting. We would love to get on the phone to brainstorm further.